Kristen Sherlock here from Salt Lake City, UT. It has been a very long time since I last wrote. Adjusting to our newest Sherlock Addition has taken time, but I assure you, this has been time well spent. Don’t worry, I have taken pictures–lots pf pictures!–to document all the awesome highs and low lows that comes with a family of six people. You will be bombarded with them soon. I promise.

Today I am writing about a topic that is personal to me, and of a serious nature: Childhood Cancer Awareness. Did you know that September is the National Childhood Awareness Month in the United States? Yeah… me neither. To be frank with you, it wasn’t until recently that I became aware of the severity of childhood cancers.

According to the American Childhood Cancer Organization, “in the US, 15,780 children under the age of 21 are diagnosed with cancer every year; approximately 1/4 of them will not survive the disease. A diagnosis turns the lives of the entire family upside down. The objective of Childhood Cancer Awareness Month is to put a spotlight on the types of cancer that largely affect children, survivorship issues, and – importantly – to help raise funds for research and family support.”

In 2008, the day September 13th, specifically, was recognized as “National Childhood Cancer Awareness Day” as a result of a Senate resolution introduced by U.S. Senators Wayne Allard (R-Colo.) and Hillary Rodham Clinton (D-NY).

“Never before in history has the dream of eliminating childhood cancer been so attainable, yet seemed so elusive,” said Senator Allard. “We live in a nation where the effectiveness of treatments and technology offer hope to children who dream of a bright future. Each case of childhood cancer is a very personal tragedy that can strike any family with children, at anytime, anywhere. In setting aside September 13th to recognize this battle on cancer, we continue of our efforts to draw attention to the victims of childhood cancer and the great work of the families and organizations who continue the fight.”
“We have made tremendous strides in the fight against childhood cancer, but far too many children still suffer and lose their lives to this illness. The more we know as a nation the better able we will be to prevent and treat the disease and help those who are battling and surviving pediatric cancers.  National Childhood Cancer Awareness Day is an opportunity to reach out to all Americans with the facts about childhood cancer, and this day will be an important symbol of our commitment on all days to find a cure,” said Senator Clinton.
Childhood cancer is the number one disease killer and the second overall leading cause of death of children in the United States. Increasing awareness is the first step to raising more advocacy and support for childhood cancer programs and research. Sadly, too few people know how dire the situation is for these children and their families.

One such child, one such family, is the adopted daughter of my brother- and sister-in-law named Allyson. Allyson was born with Down Syndrome, which can seem scary to some people, but not to my brother- and sister-in-law Matthew and Emma. They jumped at the chance to bring this beautiful baby girl into their family. The adoption of Allyson was finalized in March 2013. In July 2013, she was diagnosed with Acute Myeloid Leukemia of Down Syndrome (AML).

Allyson began treatment in September 2013, and after six long rounds of chemotherapy, and nine months in Sick Kids Hospital in Toronto, Canada, Allyson was declared in full remission.
Recently, July 2014, a routine checkup showed some abnormalities in Allyson’s blood.  After a bone marrow aspiration test, Matthew & Emma were informed that Allyson had relapsed.  Allyson is currently undergoing two more rounds of chemotherapy in hopes that a bone marrow transplant can be completed after her treatments.

Please, if you haven’t already done so, go read the most recent update on Allyson’s care, check out her pictures, and share this message with your friends and family. Her YouCaring.com account is here:  http://www.youcaring.com/medical-fundraiser/a-blessing-to-all-who-meet-her/214095
Allyson is one of the many waiting for a bone marrow donor, and is facing a long road of fighting and surviving. I have seen the toll this cancer has taken upon her little 2.5 year-old body, and the strain it has placed on her mother, father and brother. Allyson, like many others, needs your and my help, because kids can’t fight cancer alone.
Please join me during the month of September to advocate and make others aware of Childhood Cancer. Please help me help my niece Allyson, because, again, kids can’t fight cancer alone.

I believe Martha and I were cut from the same cloth, so to speak. Practical, concerned in material service, hospitable and self-denying. Excellent traits to possess, on the surface, but have they prevented me from having better relationships? How have these traits impacted my ability to love, and be loved? Give, and find joy? The story of Martha and Mary as found in the New Testament of the King James Bible (Luke 10: 38-42) helped me learn that I, too, need to “choose the better part”.

On one of His visits to Bethany, a small town about two miles from Jerusalem, Jesus was received at the home where dwelt two sisters, Martha and Mary. Martha was a housekeeper, and therefore she assumed responsibility for the proper treatment of the distinguished Guest. While she busied herself with preparations and was “cumbered about much serving,” well intended for the comfort and entertainment of Jesus. Mary sat at the Master’s feet, listening with reverent attention to His words. Martha grew fretful in her bustling anxiety, and came in, say, “Lord, dost thou not care that my sister hath left me to serve alone? bid her therefore that she help me.”

She was talking to Jesus, but really at Mary.

For the moment she lost her calmness in undue worry over incidental details. It is reasonable to infer that Jesus was on terms of familiarity in the household, else the good woman would scarcely have appealed to Him in a little matter of domestic concern. He replied to her complaining words with marked tenderness:

“Martha, Martha, though art careful and troubled about many things: but one thing is needful: and Mary hath chosen that good part, which shall not be taken away from her.

There was no reproof of Martha’s desire to provide well; nor any sanction of possible neglect on Mary’s part. We must suppose that Mary had been a willing helper before the Master’s arrival; but now He had come, she chose to remain with Him. Had she been culpably neglectful of her duty, Jesus would not have commended her course.

He desired not well-served meals and material comforts only, but the company of the sisters, and above all their receptive attention to what He had to say. He had more to give them than they could possibly provide for Him. Jesus loved the two sisters and their brother as well. (see John 11:5) Both these women were devoted to Jesus, and each expressed herself in her own way. Martha was of a practical turn, concerned in material service; she was by nature hospitable and self-denying. Mary, contemplative and more spiritually inclined, showed her devotion though the service of companionship and appreciation. (see John 12:2, 3)**

By inattention to household duties, the little touches that make or mar the family peace, many a woman has reduced her home to a comfortless house; and many another has eliminated the essential elements of home by her self assumed persistent drudgery, in which she denies to dear ones the cheer of her loving companionship. One-sided service, however devoted, may become neglect. There is a time for labor inside the home as in the open; in every family time should be found for cultivating that better part, that one thing needful–true, spiritual development.

The sweetest, and arguably the most difficult, time of year occurs between mid- December to early- January. We busy ourselves with holiday preparations, cooking and baking, gift making and gift giving, family gathering and traveling, and not to forget the regular every-day chores of laundry, cleaning and meal preparing.

This is also the time of year when our children are not in school for four-to- six hours per day, five days a week. Very quickly, without a routine, they become anxious, bored, frustrated, and temperamental. Who can blame them? Each one of us would have difficulty if our lives drastically change over night.

Many of these negative feelings can be prevented, and temper-tantrums can be avoided, with a little bit of planning. Here is one activity suggestion that can induce family bonding, and not whining, for a morning or afternoon during the winter school break.

I am warning you now… This Winter Activity for Children post will be picture heavy. 🙂

What you will need:

One large pine cone per child

Cake pan to place seed in

Yarn or other type of string to tie around onecone

Go for a walk with your children where you know there are conifer (evergreen) trees. This can be at a park, a playground, a school, near any commercial building or along a country road. Gather more fallen pine cones from the ground under the trees, especially if the cones are closed, than you think you will need. This will give you a better selection to choose from when you begin your project at home.

Take home your pine cones and tie a 12- 18 inch piece of yarn around the widest portion of the pine cone, being sure to leave a “tail” to tie around a tree branch a little later. Next, “frost” the open pine cones with smooth peanut butter (this will be messy, and children will love it!), and then roll or sprinkle the frosted pine cones with your bird seed over a cake pan. Again, this part can–sorry, I mean, will–be messy. The cake pan will help contain the mess of little seeds rolling about the kitchen. Lastly, hang the peanut butter frosted and bird seed sprinkled pine cones outside on a tree branch to give our feathered friends a treat.

Thinking of giving this winter activity as a gift? Here is an adorable FREE poem to give with the pine cone, seed and yarn in a bag: Winter Activity for Children . 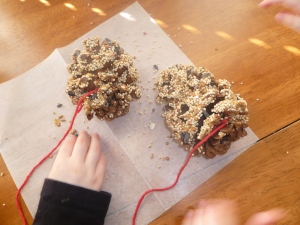 Completed pine cone in need of yarn. Was it difficult to tie yarn around the pine cone after it was coated in bird seed? YES! I suggest working with the yarn earlier in the activity.

Thanks for stopping by! Please share your thoughts and comments below… I’d love to hear form ya!

Welcome. You are about to be Sher Locked!

As a crazy-busy wife, mother, Latter-Day Saint Christian, pie-baker and brownie eater for decades, I have learned that to have a peaceful life, the simple and little things matter most.

With an educational background in Horticulture and Urban Planning, a knack in the kitchen, a love for organization, and four kick-butt kids who keep me humble, I write to share the things I learn.

Friends! Lets help one another improve our lifestyle habits, and draw closer with our family and friends through good nutrition and fun activities that build lasting memories. Let's enjoy life together!!